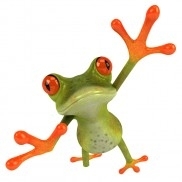 Happy New Year! We are now in the month of shattered resolutions, when all those good intentions lay wasted in a pile of takeaway boxes and empty bottles. The question is "why do so many resolutions often fail?" and maybe more importantly "what has that got to do with giving presentations?" Believe it or not, it has EVERYTHING to do with successful presentations. Read on and I'll tell you why....

The link
When you give a presentation, more often than not you will be hoping to compel your audience to take some sort of action (whether that's to think differently, use a different process, buy something etc.). In essence, you're asking them to change who they are - to think or behave differently to how they have done previously in order to reach a desirable outcome. Sound familiar? Basically, every time we give a compelling presentation we are asking people to make a resolution of some kind - and we all know how well they normally workout!

So what's the solution?
Making change stick is a huge subject, and I'll definitely be coming back to it in later posts. For now though, we'll look at three techniques we can use that will help us help the people we're presenting to, to make that change.

Find the emotion
Most people, when trying to compel others, make a logical argument. There's nothing wrong with that, but on it's own it's often not enough to make people change their behaviour in the long term. We are, at heart, emotional beings. As such, if there is no emotional connection to something, people tend not to be that engaged. So, analyse whatever it is you're suggesting people do differently, and find what emotion it caters to. Is it pleasure, if so what (e.g. people feeling great because they've accomplished something they'd previously thought impossible, and that has made a real difference), or it might be fear or embarrassment (e.g. do they really want to be the team that passed up on the next big opportunity? How will that look to senior management?). Think about your audience at an individual level and really find that hook that's going to get them actually wanting to make that change, rather than just logically thinking it's a good idea.

Keep it simple
If we're trying to get people to change, one of the biggest obstacles is complexity. Imagine you'd made a new years resolution to eat more healthily. That sounds like a great one (and many of us make that exact resolution following the onslaught of 'The Christmas Binge'!), but it's anything but simple. Type in 'how to eat more healthily' into a search engine and you'll be deluged with information on what you should be doing, but most of it will contradict the other articles you've already read. It's not surprising then, when faced with so much choice and speculation, that we soon fall back into our old habits, as we just couldn't face all of the decision making (because we already have to do enough of that right?). Much better to make one small change stick first, get some traction, then add to it. For instance, rather than 'eat more healthily' we resolve to 'only snack on fruit' or 'drink semi-skimmed milk'. Both are very simple to follow, but crucially would have a demonstrable affect within a matter of weeks. It's tempting to talk people through your ten point plan, but resist the urge. Talk about the end point definitely, but then focus on number 1 and make sure it's simple and easy to do. Which brings me onto the last point...

Make it easy
Even if what people have to do is simple, most of them already have enough on their plate that they'll take the path of least resistance, which invariably is the way they've always done things. This is even more pronounced when people are stressed (which is why making big resolutions in January is never a great idea, as we often find going back to work in January really stressful!). To combat this, we want to make things as easy as possible, ideally even easier than the current status quo. That means having a system in place (that you've trialled and won't break!), or a pro-forma, or a little check list or whatever else would make what you're asking people to do the easiest thing in the world. To use one of the examples above of eating healthier - 'drink semi-skimmed milk'. This seems quite an easy thing to do. However, to make it really easy, we would help people ensure they have no choice. So 'drink semi-skimmed milk' would become 'buy semi-skimmed milk'. If that's the only milk in the fridge, believe me people will drink it!! So have a think about the change you're going to ask people to make - what would make it easy?

Remember, keeping it simple and easy for them does not mean it's going to be simple and easy for you! But, if the change is worth it, then it's well worth putting the effort in to make it stick. Not only that, but you can use the same techniques to help nail your own resolutions. You can, at last, be that smug person in June who is the only one in the office that has stuck to your New Year's resolution!